So you want to be your authentic self in your corporate job. You have a photo of Bozoma Saint John as your screensaver. She is #goals. But the data about how to break through like the chief brand officer of Uber is daunting, to say the least.

Late last year, McKinsey & Co., along with LeanIn.Org released their annual Women in the Workplace study, and there seemed to be a collective rejoicing and simultaneous sigh from women of color across the country. Finally, there was data to back what many already knew: that women of color—especially black women—have more challenges in the corporate environment than most as they attempt to climb the ladder into the C-suite. The report shares that the complexity of gender and color actually do matter when it comes to filling the pipeline to leadership, and in many cases, women and women of color—again, especially black women—are left behind due to lack of access to senior leadership and other factors.

The report shows that at some point many black women simply opt out to start their own companies. Consider that there are currently no black women CEOs at Fortune 500 companies. Ursula Burns, former CEO at Xerox was the most recent, but she retired in 2016.   Fortune’s Ellen McGirt unpacked many of the reasons in a compelling article called The Black Ceiling: Why African-American Women aren’t Making it to the Top in Corporate America. The article calls black women “double outsiders,” being neither white nor men. That means black women are different right down to their DNA and chromosomes, which means they are largely foreign to a corporate culture that is used to having the exact opposite of black women in the ranks, especially in leadership. The people in the company may expect to see black women in support roles if they are in the environment at all. If this is true, the friction is not only natural, it is nearly unavoidable.

So what do black women need to actually do in order to bring their most authentic selves to work and succeed knowing all this? Understanding that the deck seems to be organically stacked against who they truly are? Women’s conferences typically have panels and speakers on the topic, but what does it actually mean to bring your #blackgirlmagic to work and still ascend into leadership? Is it even possible?

IT CAN BE DONE

The good news is that Ursula Burns and others have done it. So I contacted more of corporate America’s power players, all of them currently or previously in the C-suite or officers in Fortune 500s. One of them is an executive coach and past executive leader. I asked them to give their take on whether it really is possible to walk tall in “the skin you’re in” at work as a black woman and what it actually takes.

Why did I turn to these ladies? Their résumés and credentials alone qualify them, but each of them has had an incredible impact on my career over the past decade, and I know from personal experience that these women are genuinely who they are at work as well as in their daily lives. They are indeed authentic. Part one of my conversations with these extraordinary women follow. It should also be noted that each of these game changers is a member of the Executive Leadership Council of which I am a Fellow, having had the awesome opportunity to complete their Strategic Pathways leadership training and their annual Leadership Summit.

WHAT IT MEANS TO BE AUTHENTIC

When the new interim CEO of the Dallas Mavericks and retired AT&T Human Resources SVP and Chief Diversity Officer Cynthia “Cynt” Marshall started her first job after graduating from the University of California at Berkeley more than 36 years ago, she was met with a superior who challenged her church clothes, braids, and “red-hooker shoes” on her first day. After plenty of tears and navigating that trying time at the impressionable age of 21, she said that by the time she was promoted to the officer ranks some 20 years later, she was far more comfortable in her skin. She said mostly, it was because she had a better idea of who she was at that point, which is crucial to walking tall in your own skin.

MARSHALL: The person who gets out of bed in the morning is the person that walks into the building. So it’s the beliefs you have, the values you have, the problems you have…all of that gets out of bed with you. You don’t go into a phone booth and come out with a cape on and a logo of your company, like somebody else, some superhero. That person actually walks into the building. So what you have to try to create, especially as leaders, try to create a culture—you want a culture where that person who gets up out of the bed in the morning walks into the door and you meet them where they live. It needs to be an environment where it is OK for them to be them. Marshall says what she wishes she knew on her first day what she knows now: that it is important to do your homework on the company culture before you enter it. She also pointed to performance as a factor. Over a period of time, she said, the company will get to know your stellar performance, and your personal nuances will matter less and less.

Marshall is now the first woman CEO in the National Basketball Association.

Cheryl Grace, senior vice president of U.S. Strategic Community Alliances and Consumer Engagement at Nielsen Inc., added that one’s most authentic self is the gateway to adding value. Grace said it was sometimes challenging initially to balance her outgoing and outspoken nature with the corporate environment, and eventually learned when to tone it down and when to turn up the volume. She said there is a time and a place for everything you bring to the table, but ultimately, mimicking other people isn’t an option.

GRACE: I think it means that you shouldn’t have to pretend that you’re someone else to be successful. I think this is relatively unique to women, particularly women of color because historically we’ve either tried to run the gamut of trying to dress like men and talk like men in business situations. But it is when you are your most natural self, and it is important because you are more likely to be comfortable in your skin and thereby provide suggestions, recommendations, and solutions from that unique perspective than if you are trying to think like everyone else in the room thinks. Ideally, when a company has several unique ways of looking at a situation or a business issue, they are more likely to land on the one solution that works for the broader universe or for their broader market, rather than a more narrowly defined one when they have more authentic people bringing those views to the table.

(Image: Trudy Bourgeois, founder/CEO of the Center for Workforce Excellence)

Trudy Bourgeois is an executive coach and the founder and CEO of the Center for Workforce Excellence. She is also the author of the new book EQUALITY: Courageous Conversations About Women, Men, and Race to Spark a Diversity and Inclusion Breakthrough. She also is a presenter at the Executive Leadership Council’s Leadership Week for high-achieving black executives who are looking to break into the C-suite. In those sessions, she reminds professionals to know their proud history as black people in America, and to know that they are “daughters (and sons) of God.” It’s a call to action to know one’s self-worth and not to accept anything but the best in their careers and lives.

She said that part of the issue is that most people don’t know what “authenticity” or “authentic behavior” even looks like. Bourgeois says it is far more than whether you wear your hair natural or not, or even simply about what you wear.

BOURGEOIS: They say that they want to be authentic, but they haven’t defined who they really are, and as a result, they have not developed the courage to maximize what they bring to the table. We have to “get” who we are. We have to understand what value that we bring, and that sweet spot is when our passions and our capabilities align with an organization’s needs because when we are in a position to demonstrate our brilliance, people will accept us for who we are.

Mary Kay Chief Marketing Officer Sheryl Adkins Green has had an extremely successful track record in the beauty business but says the same rules apply in any industry. It didn’t take long for her to move from vice president of Marketing to CMO at the company after joining in 2009. The Harvard Business School alumna believes black women have to be smart about the company culture they choose to work in then deliver that magic in doses, choosing the time and place to shine. Stellar performance, however, is key.

ADKINS GREEN: Bringing your “authentic self” means confidently bringing all of your talent, interests, and perspective to your role vs. just a portion. Some worry that their strengths and talents might intimidate or threaten their relationship with their manager and/or team members, and this can be a risk. But playing “small,” playing not-to-lose versus playing to win is an even riskier career strategy. If you want to be seen as the “best,” you need to bring your best to your role—every day. The key is to be savvy about how and when you “show your stuff,” and you need to align your efforts to the goals of the enterprise.

In Part 2 of this series, we’ll dive deeper with these extraordinary women and ask them what advice they have for women, especially black women, on how to successfully bring one’s authentic self to work. We will also go in-depth with Bourgeois on what black women in the workforce can do to leverage a concept she calls “creating your own equality.”

This one is pretty obvious though any assessment of scalability extends beyond the system itself to include the technical organization, and the answers to the first two questions below will indicate how the respondent thinks about scalability, not just from a technical perspective, but an organizational one also. 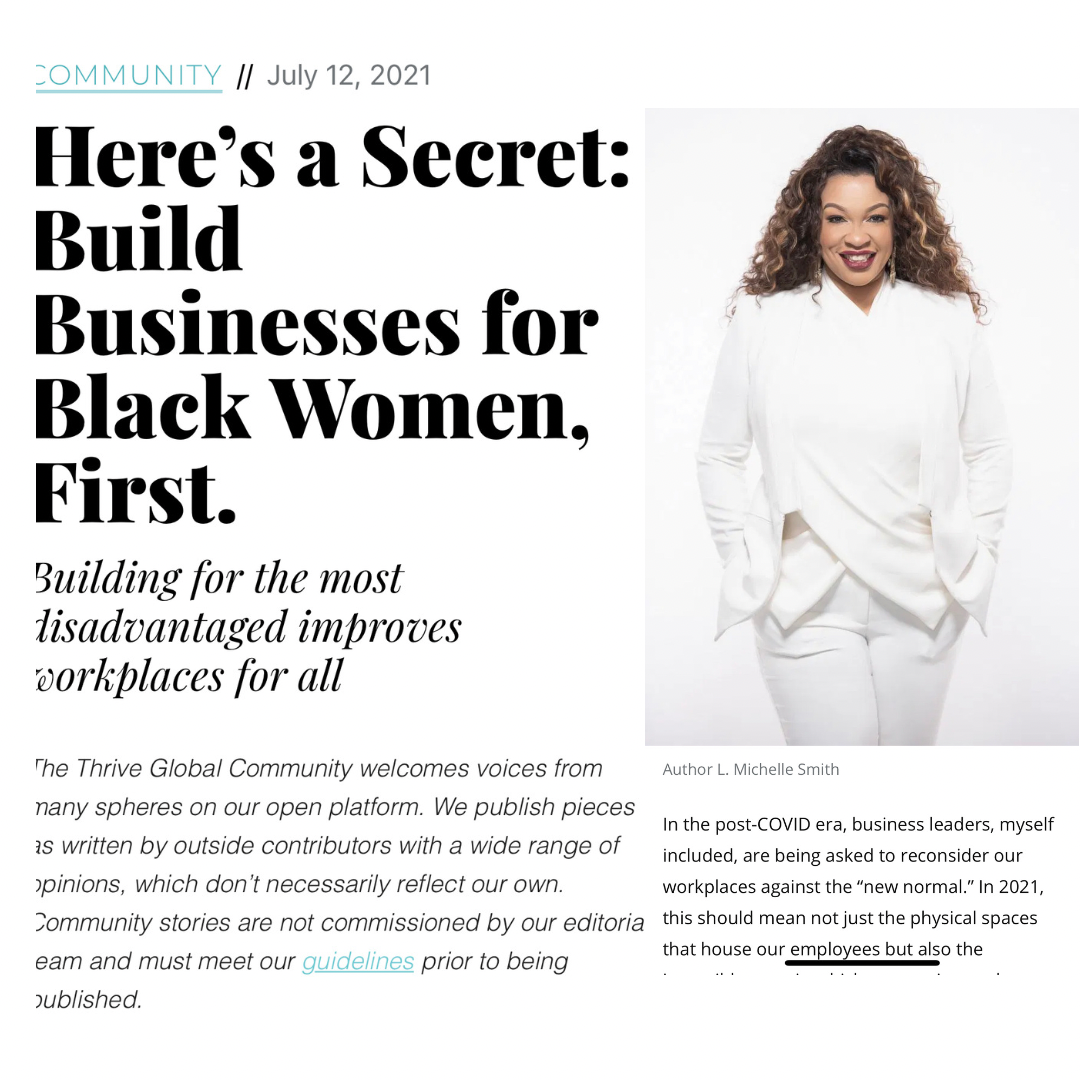 Thrive Global compares No Thanks premise to Microsoft CEO’s thinking

Clearly, when a journalist compares your thinking to that of… 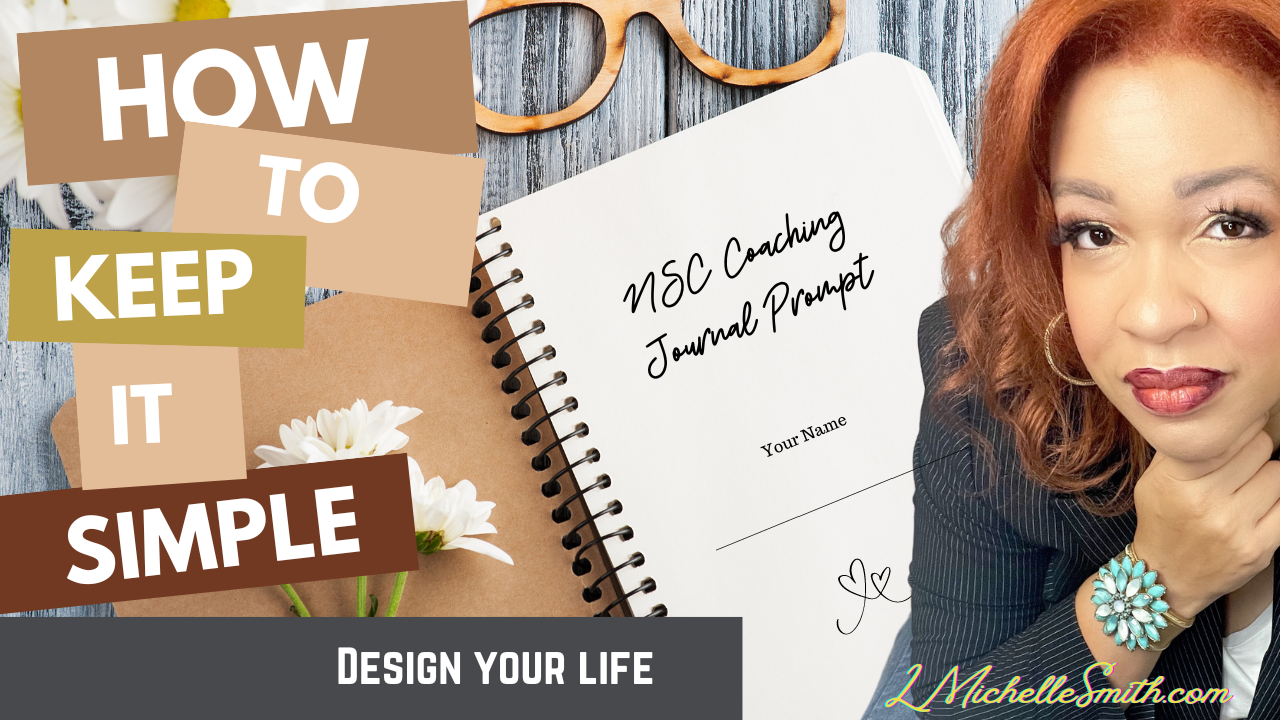 How can you work smarter?

You may consider letting go of something if you want…

by L. Michelle Smith
Posted on June 30, 2022
Posted in CareerCoachingLeadership 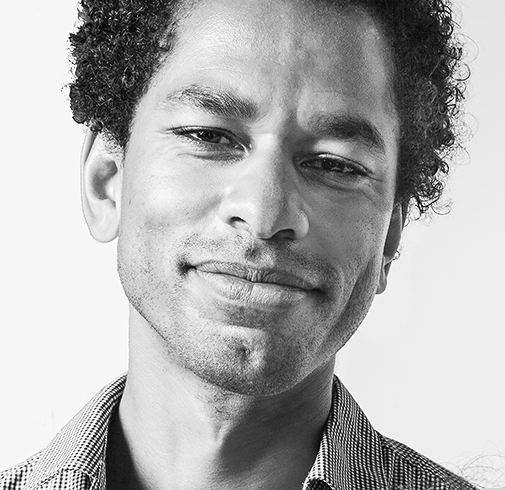 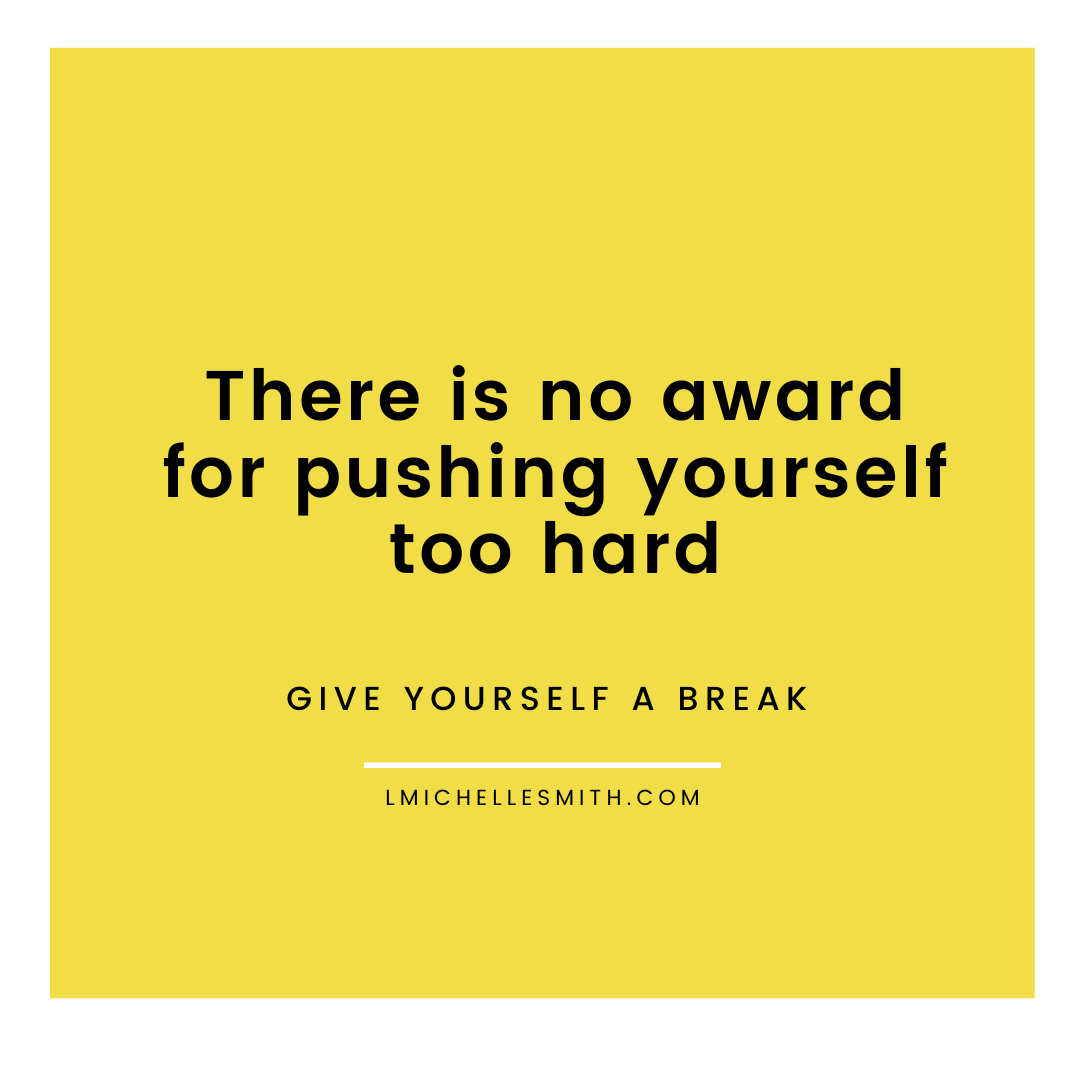 So now we know that brain fog is languishing

To put it simply, languishing is the blahs. We all… 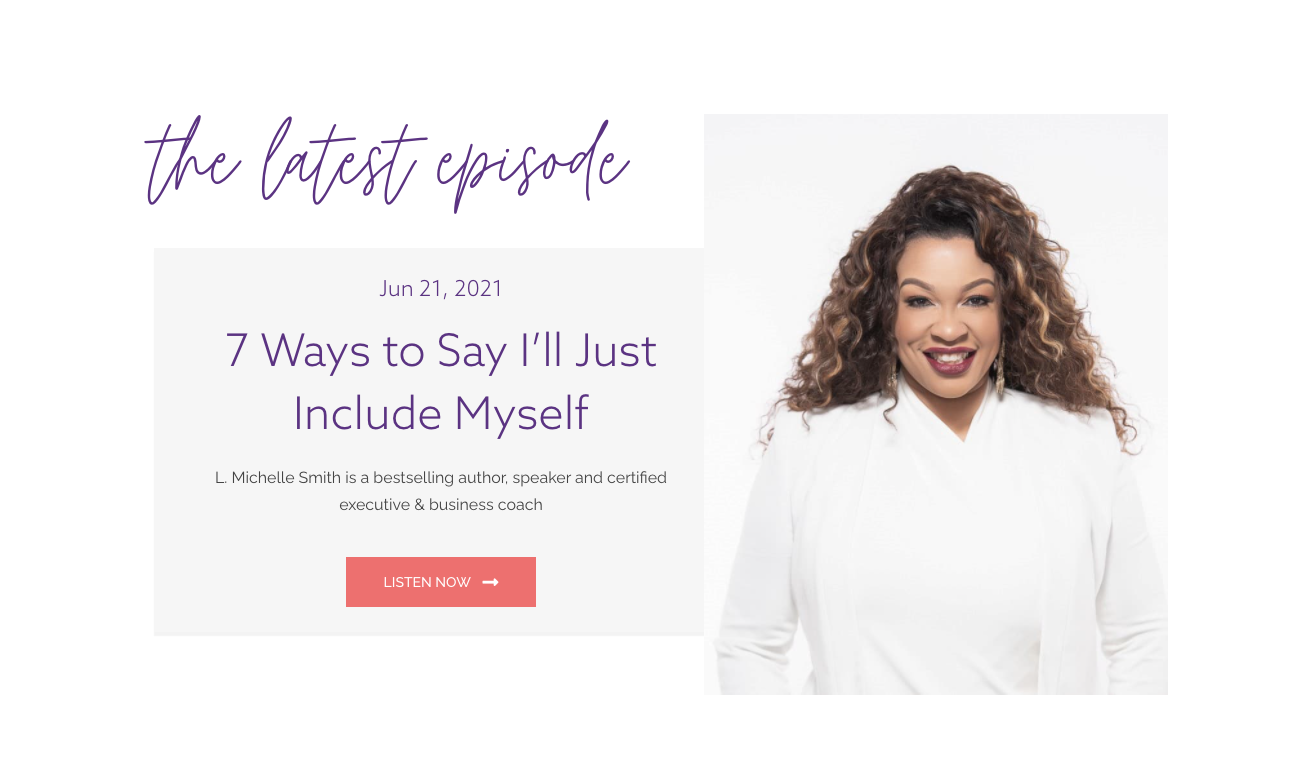 LeadHERship Global Podcast: How to uncover your value as a woman leader

We’ve all been told over and over again that, as…

by L. Michelle Smith
Posted on June 21, 2021
Posted in BooksBrand PartnershipsIn the MediaPodcastWomen 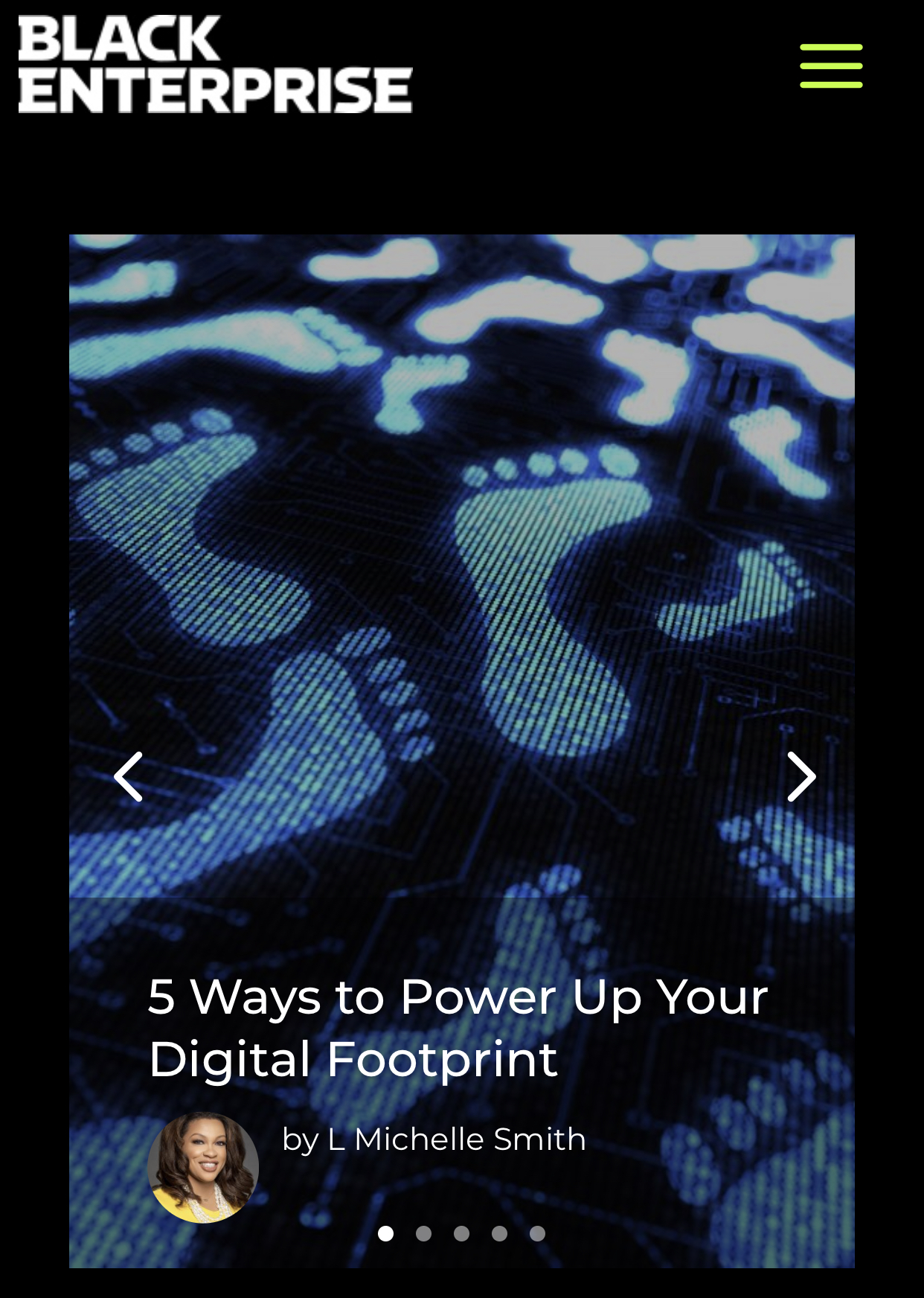 5 Ways to Power Up Your Digital Footprint

Googled yourself lately? What did you notice?  Are you…